We had our big celebration last night. There were the terrible odes and the toasts and the running gags common to all such gatherings – and some mordant surgical jokes characteristic of this one – so I won’t attempt an account. The men have all gone off this morning, rather mutedly, for a Land Rover tour of the Falkland battlegrounds, and I am back in the Seamen’s Mission.  There’s some time, at last, to reflect on the cadences of the adventure. But at the moment I can’t think of any way to write about it that won’t sound glib or bathetic. I am attaching a few South Georgia pictures instead, although they don’t do it justice either.

In 24 hours time, we’ll be heading for the airport. There will be one more message, definitely the last post, which I shall send from London where photo uploading is easy, quick and even cheap…

(The pictures are mine except for the good one, which is Skip’s.)

At anchor in Cobbler's Cove.

The boat arrives to rescue us, Fortuna Bay

The grave site in Grytviken cemetery 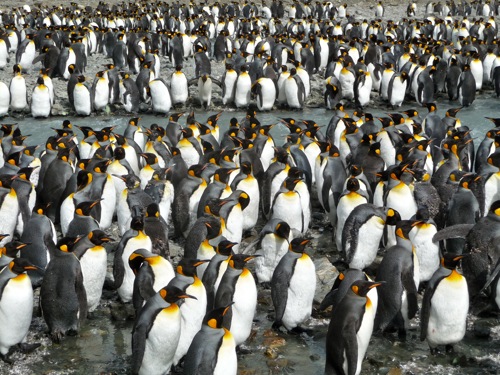 Some of the 500,000 pairs of breeding king penguins, St Andrew's Bay