This is what we did

For those who have done the Traverse (and thanks for your messages, however you have picked up this blog), or who know a little about the territory, what follows is the summary. For everyone else I’ll try to describe what it was actually like to do it  in a couple of future posts. I am, frankly, still too weary and spaced out do the experience justice today. And apart from anything else it’s my 64th birthday: I intend to start celebrating pretty soon – and not to stop at least until it’s not my birthday any longer.  Cheers!

Day 1. We were put ashore at Peggotty Bluff early this morning. Our gear had survived overnight packed in the pulks and all we had to do was step into skis, clip into our traces and move off in our three ropes. We climbed up Shackleton Gap and headed east across the open space of the Murray Snowfield. Contrary to the forecast the wind got steadily stronger. By the middle of the afternoon we were fighting gales with gusts up to 50 knots. Twice I was blown completely off my feet and dumped upside down. More about that later. At last we made the steep climb up to a point just below the Trident Ridge and camped in a wind scoop.

Day 2. Following a 4 am wake-up it took two and a half hours to strike camp and get ready to move. After the short climb to the ridge itself, we were faced with the task of lowering ten heavy pulks down three climbing ropes tied together to make a 180m length – down not one but three separate stages, making a total drop-off of well over 500m down to the Crean Glacier. This massive task took seven hours. Stephen, Skip and Tom bore the brunt of the technical rope work but we all worked flat out wherever we could. By the time we were down and had gulped some food it was 3pm and there were still 12 km to cover until our planned camp. I don’t think I was the only one who felt beat, and relieved when Stephen called a stop for the night. There was a good deal of anxiety about our exposed position in the middle of the glacier, with big winds forecast overnight. But there was nothing else for it. 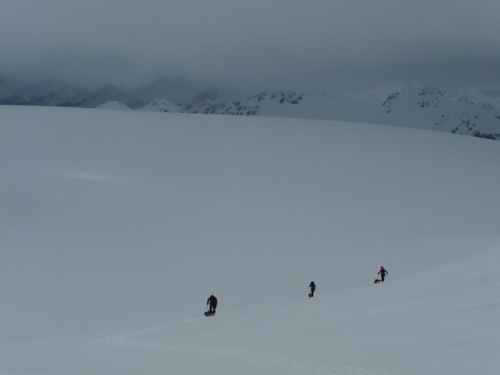 Roped up on the Crean Glacier

Day 3. In the event the winds were not too bad overnight. We even had a lie-in – until a luxurious 6 am. We crossed the remaining expanse of the Crean, made a gentle climb to the division from the Fortuna Glacier, then skied down to our next camp in another snow scoop sheltered beneath rocks below Breakwind Ridge – our position, as I noted in my scribbled diary, 37 deg 52 min W, 54 deg 10 min S.

Day 4. Up and over Breakwind Ridge – a short climb using crampons and ice axes up the headwall, to the narrow rock ridge itself, then another shorter lower for the pulks down to the Fortuna Glacier, where we had a view to our left of the blue slice of Fortuna Bay and in the distance another bluff, beyond Stromness Harbour. It was from Breakwind Ridge that Shackleton heard the distant toot of the whaling station’s whistle, and knew that he was in striking distance of rescue. We skied over spring snow in wonderful sunshine, descending all the time until we reached a narrowing gully through which a river funnelled towards the sea. Hard going on touring skis, let alone towing an unwieldy pulk. At last we gained the beach at Fortuna bay, and camped for the night.

Day 6. As I described yesterday, we completed the last portion of the journey known as the Shackleton Walk. Up from Fortuna bay, over some rounded cols, and a ski descent on heavy snow to the last mile or so of stumbling over boggy tussock grass to the shore of Stromness Bay. When we got to the beach champagne was brought over by Miles in the dinghy and Skip popped the bottle cork with one slash of my K2 ski….. 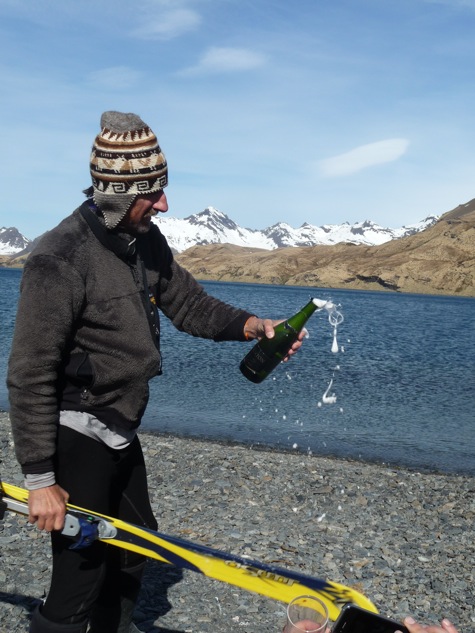 The tour as a whole was both harder and longer and more demanding than I’d expected – probably the hardest expedition I’ve ever made – but also far more exciting, more satisfying and more complete than any other ski mountaineering excursion.

The history is so vivid, so all around you. The scenery is staggering. And the savagery of the weather means that you are continually rocking on the sharp edge of potential disaster – without any prospect of external rescue. Unlike in the Alps, or even the Himalayas, the cavalry is not going to arrive eventually in a helicopter to winch you off. There was no time, fortunately, to reflect on this while it was all happening.

Today we are moored on the pontoon at Grytviken harbour. We have washed and sorted gear and stowed it away, have visited the Museum and the church. Laura has just produced an amazing chocolate birthday cake, with candles, and everyone sang happy birthday.

Tomorrow – pictures, and an attempt to describe what the traverse was really like.

9 Responses to This is what we did