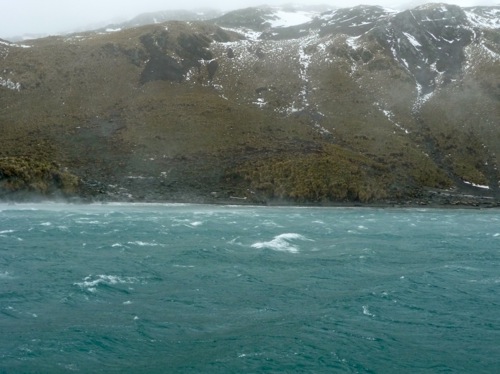 Spray driven off the waves in Elsehul Bay

We are still at Elsehul Bay. I took a photograph of the radar screen showing the boat’s movements around the anchor chain overnight – it came out as a dense black oval scribble with wild spidery limbs shooting out, like some trillipede caught on the skirting board. There’s a storm on, and even here in the shelter the boat is bucking and yawing so as to send plates flying and fruit jumping out of the bowl. Our screen shows the wind strength as almost off the scale – gusting at 50+ knots.

Movements of the boat overnight

The forecast indicates that the gale will drop by midnight, but until then we’re confined on board. Waves are smashing against the rocks a couple of hundred yards away, and it would be too difficult to land the dinghy even if a shore excursion were particularly enticing. The colony of elephant seals on the little beach opposite us have given up blaring and snorting and hunkered down in silence. On board we are sorting out kit and packing wet bags and sledge loads ready to go round to King Haakon Bay tomorrow. I’ve put the skins on my skis, rolled a dry pair of socks and some fallback Snickers bars into sealed bags, and crossed my fingers.

The winds down here are phenomenal. Williewaws is what they tend to be called in the polar literature, but what they really are is katabatics, rolling faster and faster downhill and gathering force as they go.

Apart from packing, what we’ve mostly done is cook and eat. (Still fuelling up, we insist). The polar heroes wrote a lot about stopping to fire up the trusty Primus and brew a consoling hoosh. Basically this was a food ration devised by Shackleton and Sir William Beveridge, who was the British Army’s food expert. It looked like a block of peat, and was made  of beef protein, lard, oatmeal, sugar and salt. This was cooked to a thick soupy brew and taken as hot as possible. Otherwise the men lived on seal meat, albatross chicks, limpets and other such found delicacies, and endless cigarettes.

How different is our life here aboard Australis. Last night for dinner we had fresh asparagus, followed by roast rib of beef with dauphinoise potatoes and broccoli, and finished up with apple pie and custard. And much red wine.

I did not hear any toast to the Queen, or indeed to wives and sweethearts, but I may have been in the head at the time.

Tomorrow morning, round to the south side of the island and a prayer for the famous weather window to materialise.

4 Responses to Hoosh and williewaws